The amplitude of a sound wave can be described in many ways. It is important to remember that not all sounds are the same, and hence the methods used to characterize the loudness of sound differ significantly from one another depending on the type of sound wave.

Since noise and its harmful health effects are a primary concern everywhere, the method used to measure sound must provide relevant information to assess the noise level adequately.

This means that the measurement procedure will depend on the type of noise being considered. This also means that all measurements made for a similar noise source, such as the various types of industrial noise, must be made in the same way. Otherwise, the measurements won’t be comparable; this refers to the standardization of procedures.

The following sections will discuss some of the different ways of sound measurement.

The Difference Between Sound and Noise

It is important to distinguish between sound and noise. While sound comprises everything we hear, noise is generally classified as unwanted, unpleasant, annoying, or loud sound.

Noisiness is directly associated with the loudness of sound, which must always be considered in connection with where and when the noise occurs.

When considering industrial environments, farms, bars, and even cafeterias, noise is, shockingly, the most common health hazard, with permanent hearing damage being a primary concern.

Interference in verbal communication and stress and general annoyance are among the main problems encountered in noisy environments.

Many countries have strict government legislation in place, regulating the extent of noise permitted due to various activities, such as industries, construction, communal activities, etc.

The main purpose of such rules and regulations is not only to reduce and prevent hearing impairment among community members but also to provide a better quality of life. Because symptoms such as high blood pressure usually occur due to increased exposure to noise over time.

How Can You be Measuring Sound?

The peak-to-peak pressure is then defined as the range in pressure between the most positive and negative pressure.

The root-mean-square-pressure (RMS) is characterized as the square base of normal of the square of a sound sign’s weight after some time.

RMS is most usually used to portray a sound wave since it directly identifies with the vitality, or force, created by the wave.

In the latter case, RMS pressure will vary considerably, since the RMS method requires selecting a certain period over which to average the wave’s pressure, and the pressure of an impulsive wave differs over different segments.

In general, the lengthier the duration of the signal, the lower the RMS value.

The root-mean-square pressure of a sound wave can be calculated using the following four steps:

A simple sound wave and the three common methods described above to characterize its amplitude.

They last a very small duration, typically less than a second, and include gunshots, fireworks, hammer blows, and blasts from firearms.

Methods for assessing the risk of hearing damage from impulsive noise are an active and ongoing research area.

Impulse sound levels, particularly those produced by fireworks or firearms, can reach peak values of 170 to180 dB Sound Pressure Level (SPL), and sometimes even higher.

However, if such an instrument is used, the meter response times should be shorter for accurate measurements due to their rapid nature.

These parameters are used because, in most measurement situations, a conventional sound level meter makes it very difficult to calculate a fluctuating wave’s exact sound level.

Leq (equivalent continuous sound level) is the steady sound pressure level, which, over a specific period, has the same total energy as the original fluctuating noise. Hence, Leq is the RMS sound level, where the measurement duration is used as the averaging time.

Leq is most commonly used to measure:

SEL, or sound exposure level, is a constant sound level with the same amount of energy in one second as the original noise.

Hence, SEL is analogous to Leq. The total sound energy is unified over the measurement period, but rather than averaging it over the entire period, a reference period of once the second is used.

where time is the exposure time of the Leq value expressed in seconds.

SEL is most commonly used to measure transient noise.

A typical meter comprises a microphone that picks up sound and converts it into a measurable electrical signal, which is then worked on by electronic circuitry, which operates on the signal to describe its various characteristics. The indicating device is most commonly a meter which is calibrated to read sound levels in decibels.

The electronic circuitry is adjustable to read most sound frequencies and their intensities. Since the received alternating current (AC) signal must first be converted to a DC (direct current) signal, a time constant is required for averaging the signal, which will depend on the instrument’s purpose and what is being measured.

A typical sound level meter can switch between a scale that measures uniform sound intensities for many frequencies, known as unweighted, and a scale that uses a frequency-dependent weighting factor that yields a measurement nearer to that of a human ear. A-frequency-weighting is the most commonly used standard.

The A-frequency-weighting scale is the most commonly used and is useful when describing the effect of complex noises on people.

There are three basic types of sound level meters, which are briefly described below.

As described above, the standard sound level meter converts an AC signal received from the microphone to a DC signal via a root-mean-square (RMS) circuit. Hence, it requires a time constant of integration. However, an exponentially averaging sound level meter only provides a glimpse of the existing noise level, and its use is limited for assessing the risk of hearing damage.

As suggested by the name, integrating meter merely integrates (sums up) the frequency-weighted noise to provide a measuring sound exposure. It is calculated using pressure squared into time.

This sound level meter is specifically designed to measure how much a person is exposed to noise summed up over a specific period. The device is usually worn on the body and has hassle-free technical requirements. However, since it is body-worn, it has limited overall acoustic capabilities. 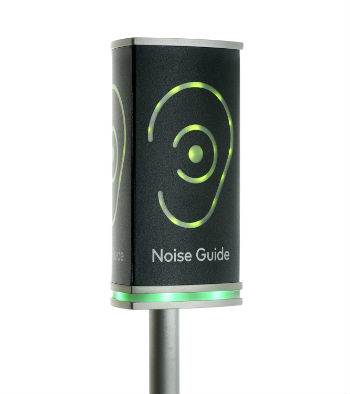